Breaking Down Barriers to IPO Investment: How Can The General Public Get Involved in IPOs? 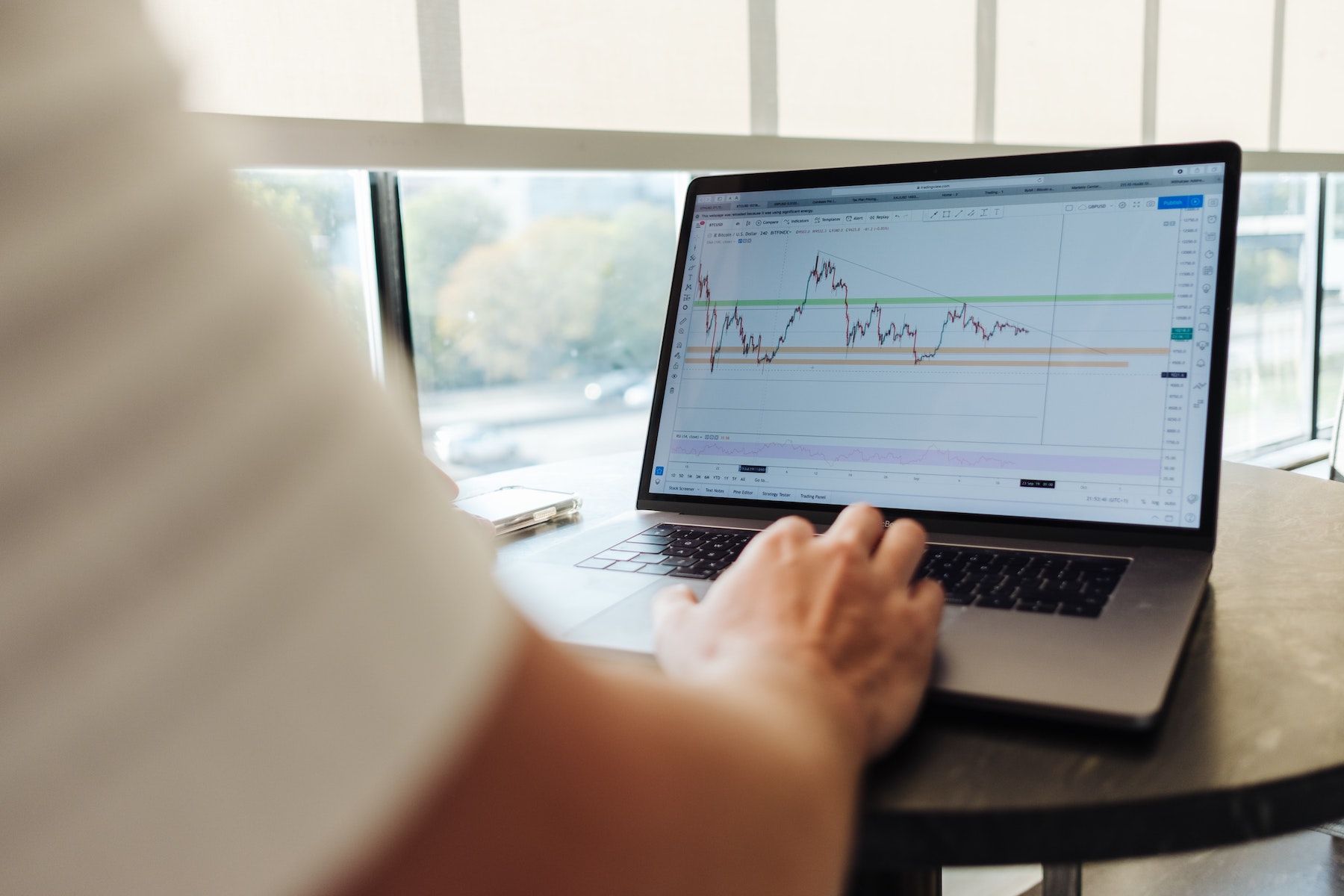 In the year 2000, WIRED ran an article covering the story of Tim Laurel, who’d asked his brokerage to purchase a few hundred shares in the IPO of Brocade Communications, which was just about to go to market. With a 240% first-day pop, the stock climbed 2,300% in nine months. However, Laurel’s great call was never acted upon by his brokerage at the time, owing to high demand and limited supply – making this story all too familiar despite the world of investment advancing more than 20 years in the meantime.

The story of initial public offerings being reserved for institutional investors with deeper pockets is one that’s followed the world of investment for many years. “Unless you’re friends and family, you really have no hope. It’s just a roll of the dice,” said Laurel following his missed opportunity. “It’s a system that many, with the exception of the retail investors, are happy to see continue.”

Back in 2000, the world was in the midst of the dotcom boom, where favourable market conditions and widespread investor optimism paved the way for more tech companies to launch IPOs and enter the public markets. Twenty years on, the COVID-19 pandemic prompted another boom period as businesses increasingly moved to adopt digital transformation, with companies and consumers alike adopting new technologies at a faster pace. 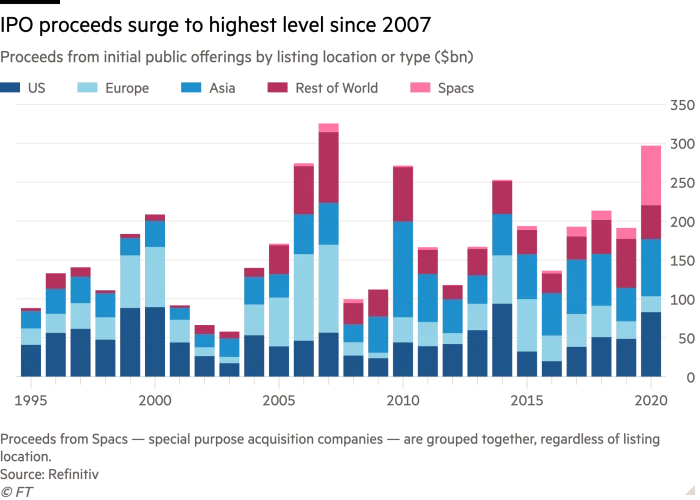 As the data above shows, the prevalence of global listings and SPACs have pushed IPO volume in 2020 higher than the peak of the dotcom boom at the turn of the century. With news of record-breaking numbers of initial public offerings arriving in 2021 so far, we could be on the verge of an unprecedented rise in new companies going public.

Maxim Manturov, head of investment research at Freedom Finance Europe explains that the playing field between retail and institutional investors is far from level. “It is the latter who usually get the far greater share of an IPO: historically, institutional investors get around 90% of all shares, with only around 10% left for retail trades,” explained Manturov.

“This is where allocation comes from: when the demand is high, the broker will have to reduce order amounts so as to at least partially fill all of them. The allocation ratio, meanwhile, depends on the investor trading activity and volume.”

Let’s take a step back and look at why initial public holdings are tricky for investors to access. Firstly, when a company goes public and issues stock, it does so with the aim of raising capital in making shares openly available. An IPO is underwritten by an investment bank that buys the shares from the company before opening them up to investors.

This means that it’s the task of brokers to encourage the purchase of shares. As institutional investors generally have more resources, they can spot a company with strong fundamentals and move quickly to buy up large volumes of shares in a single transaction – whereas distributing to individual retail investors can be more time-consuming and could involve having to arrange far greater transactions for shares.

As it’s the challenge of the underwriter to sell the shares they’re provided, they’ll generally know where to look to find the right big-money investor. Fundamentally, selling one million shares to an institutional investor that’s in close contact with the underwriter already is far easier than looking for 10,000 retail investors to buy up shares.

Rob Lutts, president and CIO of Cabot Money Management said: “It’s stacked in favor of large asset managers, but it is a money game and everyone is in it to make a buck and that is where it goes — it goes to the best customers of those brokers.”

Another key reason that retail investors can get shunned for institutional ones is that the broker supplying your shares doesn’t trust you enough to offer you access to an IPO. While the investing landscape has undergone a level of digital transformation in recent years to enable more online access to shares and IPOs alike, it’s still been tricky to access initial public offerings for individual investors that don’t have significant portfolios.

However, recent developments in online investing may soon cause this to change, with retail investors being promised a brand new, efficient, and effective way to buy into initial public offerings.

The Future of IPOs is Inclusive

Now, ahead of their own IPO, Robinhood has unveiled its IPO Access feature. In a blog post, the company explained: “We’re starting to roll out IPO Access, a new product that will give you the opportunity to buy shares of companies at their IPO price, before trading on public exchanges. With IPO Access, you can now participate in upcoming IPOs with no account minimums.” 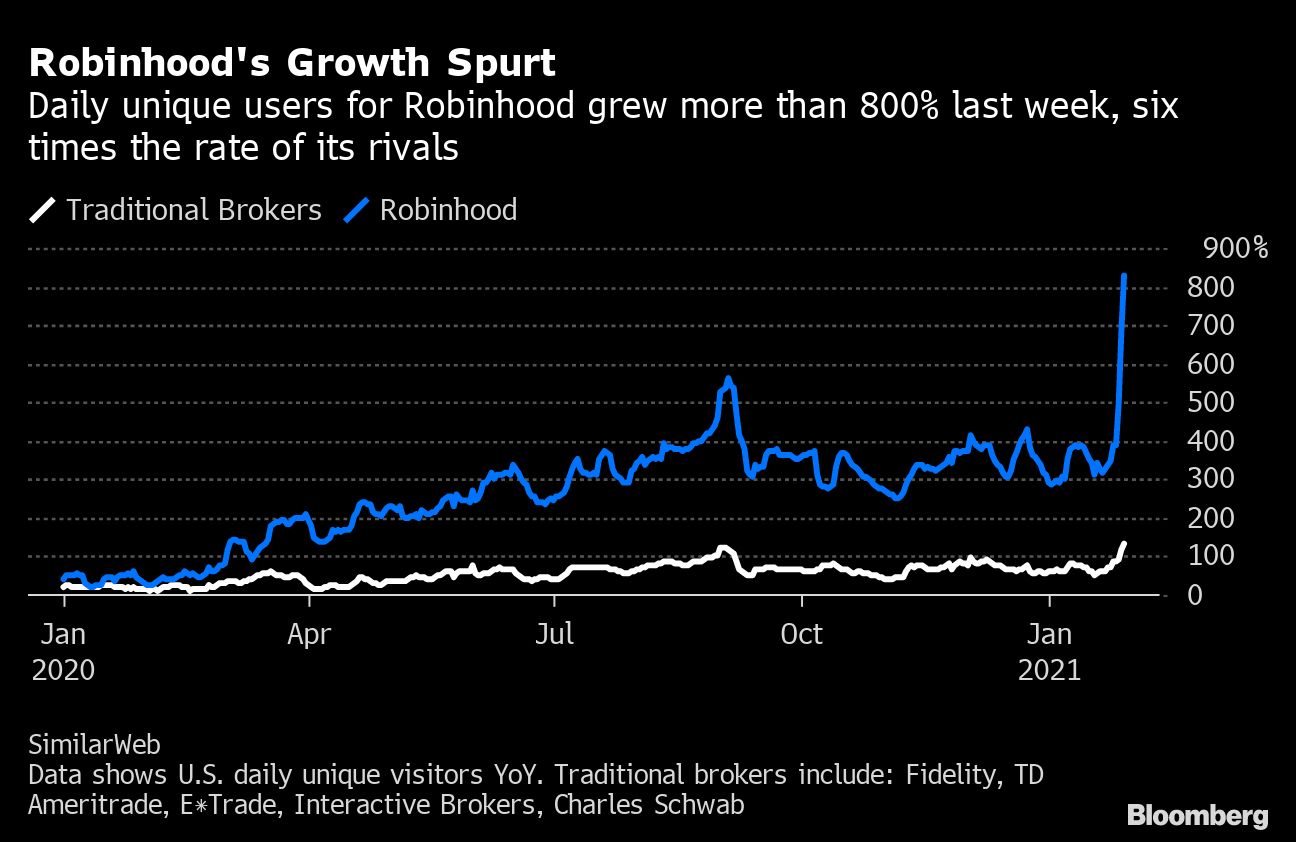 Since January 2020, Robinhood’s usage figures have grown exponentially compared to traditional brokers as more smaller-scale retail investors entered the market. As the chart above shows, a significant volume of users arrived around the time of the short squeeze on GameStop, which was a significant news story that catapulted Robinhood and the wider retail investment landscape into the limelight.

Although it’s been over 20 years since Tim Laurel tried and failed to buy the IPO of Brocade Communications, many of the barriers to initial public offerings still exist today. Despite technology significantly progressing over this time frame, many online brokers still tend to be wary of smaller scale investors.

However, the arrival of Robinhood’s IPO Access portal may well represent one of the most significant steps ever taken in making initial public offerings available for anyone to purchase, without a minimum account balance required. Although the company has rarely strayed from controversy in 2021, Robinhood’s efforts appear to genuinely pave the way for a more level playing field in the world of investment.

Create your free account to unlock your custom reading experience.